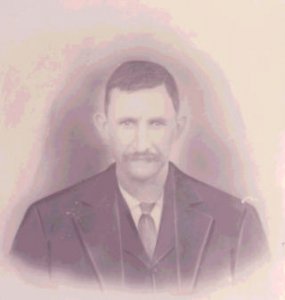 Russell was named after his father’s brother. As a young man of twenty years he took a bride, Lola Idell, who was eighteen. Lola had a short life dying of typhoid fever November 13, 1895 seven years after her marriage. But she and Russell had four children who lived to have children and grandchildren to carry on her lineage. She is buried in St. Rest Cemetery.

Upon Lola’s death, Russell “Russ” had four young children Ella Pearl born 1889, Thomas Anderson in 1891, James Albert “Jim” in 1893 and infant daughter, Jettie Irene, born in April 1895. According to the 1900 census they lived in Gordon’s big log house along with his mother, Caroline, and his younger brother, Gordon. During the week the young children were cared for by their grandmother, Caroline, and the older ones attended school at Corinth. On weekends and when school was not in session, they went across D’arbonne to stay with their maternal grandparents James R. Caver and Josephine Petty Caver. They took their Sunday clothes and attended Saints’ Rest Baptist Church. Grandma Caver lived to see her grandchildren become adults and enjoyed their children also. She died in 1932.

Russ was a farmer and had a syrup mill located behind the big log house. His grandchildren, David Brazzel and Merlene Willis, recall him as a hard working man who loved having children on his place. He never scolded or got upset with the kids but liked them to have fun. At age 31 Russ took a young second wife, Savannah “Vanner” Young born April 4, 1882. The year was 1899 and this May-December marriage was the beginning of a second family for Russ (like his father’s second marriage to Caroline). Vanner was also mentioned as living in Gordon’s big log house in the 1900 census.

Russell died at age 68 leaving his bride of 37 years with three minor children, the youngest being fourteen. Vanner lived to be 97 dying May 27, 1979. They are both buried in Corinth Cemetery.