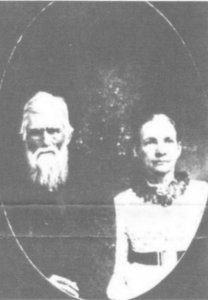 Laura Amanda was twenty years old when she married Samuel Thornton. Records indicate that they married in Claiborne Parish, Louisiana. Her mother, Mary, had died just three years before when she was 17 years old. Her father was remarried to Caroline.

Family stories tell of three Union deserters who found refuge at the Gordon Brazzel plantation in North Louisiana. Gordon and his marriageable daughters befriended them. One of these soldiers, Samuel D. Thornton, returned and married Laura. His story has tragedy and romance as recounted by family members.

Samuel Dixon Thornton born November 8, 1835 was from Missouri. He was in the U. S. Army briefly but since his sympathies lay with the Confederate cause, he deserted and joined the Confederate army. This caused a big rift in his family that never healed. In Missouri he had a young wife who died in childbirth along with her newborn child. Samuel never returned home, being estranged from his family.

Samuel and two companions were on a scouting detail for the army in North Louisiana. They sought overnight lodging at the Gordon Brazzel plantation. Laura and her sisters had compassion for the ragged soldiers. They had fabric that they had woven on their loom, and they sat up all night, cut and made coats for the soldiers. After the war, Samuel remembered the girl who sat up all night making him a coat, so he returned to woo and win her.

This Civil War romance lasted 53 years until Samuel died December 2, 1919. The young couple lived first on the Brazzel plantation where they began a family. A son James Gordon was born in 1867, along with three daughters, Martha Jane in 1870, Anna Eliza “Elida” circa 1871 and Mary Frances circa 1872.

In 1872 the Thornton family moved to Nevada (Colin Co) Tx to a rented farm, and the children attended school. At first they endured many hardships on the plains in the new, mostly unsettled land. Homesickness, hard work, and then little Mary died prior to 1878.

But soon they prospered, bought a good black land farm, and built a house where they lived until 1888. Two more daughters, Launa (Una) Lillian in 1878, and Ida Amanda in 1880 were born.

In 1888, they moved by covered wagon to Crosby Co, where Samuel and Laura had acquired 640 acres from the Public Domain of Texas. Their land was seven miles from Estacado. They raised cattle and farmed. Laura was a leader in establishing the First Baptist Church in the community of Farmer. She had a green thumb and grew beautiful flowers and had a grape arbor. She was also an excellent cook, housekeeper, and seamstress. She was better educated than the average woman in her day.

Laura died in 1924, and the homestead was sold in 1926. Laura and S. D. are buried in Estacado cemetery, as well as their son Jim, daughters Una and Ida, and several grandchildren.

This information on Samuel and Laura Thornton comes from their descendents to Carolyn Lewis.