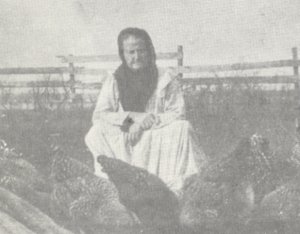 Julia Frances faced a tremendous challenge in her life when her husband of 15 years died at the age of 38. At the time of his death, she had 10 children, the oldest was 14 and the youngest not yet born. The 1900 census for Ward 7 indicated that Julia was living next door to her husband’s brother, Ambrose Wise, who was married to Amanda Burgess and near her sister, Hannah, who was married to W.T. Wilson. The struggle of raising ten children most certainly was lessened by the assistance of Julia and Columbus’ families.

The children thrived and did well in life. James was a preacher and farmer, William, Jiley 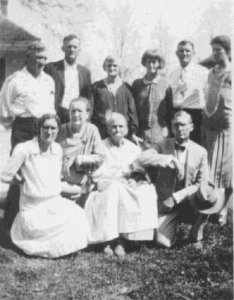 and Ivan were farmers, Alice and Carrie schoolteachers, Olen a doctor, John Henry a merchant, Frances Aurilla a homemaker and Clummie worked at the post office according to notes from great granddaughter Becky Campbell.

This is a family story and photo shared by Becky. In 1928 at age 78, Julia Frances was treated to a cross-country trip from Corinth to Ogden, Texas to visit her daughter, Frances Aurilla, and son-in-law, Charles Otis Wise. Her sons, Ivan, Olen and Henry along with their wives and Julia traveled in a Model T touring car. That must have been quiet a trip with seven adults. Becky’s grandparents, Frances Aurilla and Charles Wise, have close to 300 descendants. It’s difficult to estimate the number of descendants for Julia, but with ten children who all had good-sized families it could be in the thousands.

Julia lived to be 80 years old. She enjoyed the blessings of her children and numerous grandchildren in her later years. She joined her husband, Columbus, after her death and both are buried in Sharon Cemetery.