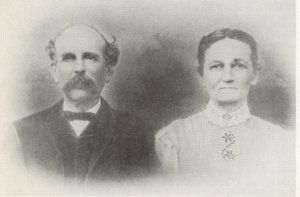 Isaiah first married in 1871 at the age of 22. His wife, Martha Ann, died November 1872; they had been married less than two years. Then at age 27 Isaiah took his second wife, Eliza Alice. She was the daughter of Pinkney Odom and Mary Caroline Ward.

Isaiah’s youngest son, Elmo, had a son, Ralph Kenneth Brazzel, who is interested in the family history and served on the building committee for the Brazzel Memorial Reunion Center. Ralph recalls that all the families lived on farms in the area. His grandfather, Isaiah, was a farmer as were his uncles, and they all lived close to each other. There were few roads and the family farms were behind or beside one another arranged much like a patchwork quilt. So when you went someplace you often traveled across another family’s farm. This made it easy to communicate with others. You would tell the family that lived next to you and they would pass the message on and on till it got to the right person. He remembers attending Corinth School and Corinth Baptist Church. The school had two rooms but when he attended only one room was used. It went to 6th grade. The men in the community repaired the country roads. They would organize a workday and all would join in as a community effort. This was before the days of the state highway department.

Isaiah lived to be 69 and Eliza Alice born April 25, 1853 died May 13, 1934 at age 81. She survived Isaiah by 17 years. Ralph said his grandmother was a happy woman known as Aunt Liza. She and Isaiah owned land that he farmed until his death. Upon her death the land was sold and a relative bought it. They were married for 46 years and are buried at Corinth Cemetery.