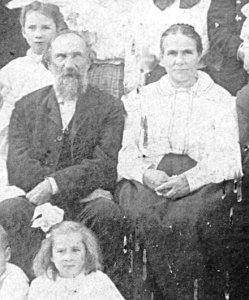 As a young man Hensley Madison served as a soldier during the Civil War. At age 25 Hensley took a wife, Mary Elizabeth Duggan. She was the daughter of Rev. Edmond Duggan and Elizabeth Swint. Take note that Emily, his sister, married William Hood whose mother was Katherine Swint. They were married in Lincoln Parish Louisiana and all of their ten children were also born in Lincoln Parish.

The Hensley Madison family lived in Louisiana until after the death of Gordon Brazzel in June 28, 1894. In a letter dictated to granddaughter Debbie Young, Stella told the story of how her father moved this whole family to Texas.

Hensley became extremely mad after his father, Gordon Brazzel, died. His anger was attributed to the small amount of estate he was left. Hensley thought that he did not receive his fair share. His stepmother, Caroline Guin second wife of Gordon, did believe he received just what he deserved. A court trail ensued to determine just who was correct and Hensley lost. During the trial it came out that he was blind from exposure to the elements (this happened during his duty as a soldier in the Civil War). After the judicial decision was against Hensley, he packed his family up and moved them to Texas.

Stella’s letter continues… The first home they occupied in Texas was in Roberson County. It was there that James and Amos died. James was the oldest son of Hensley and Amos was the youngest son. They died within 24 hours of each other and were buried in a double ceremony. The family then moved to Ellis County because Roberson County was a “sickly Land”. They had a farm out from Ennis, Texas. The next move took them to Kaufman County.

Cedar Station (now known as Gossett, Texas) was where Hensley died. After his death in late 1910, of pneumonia, Stella was sitting in the room where he was laying on a “cooling board” and the wind was blowing extremely hard and was whistling through the cracks in the door and she thought she saw the sheet move. It really scared her. Mary Duggan Brazzel lived until 1922. She died of kidney disease. She is buried in Kemp, Texas.