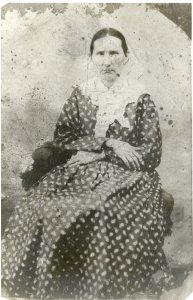 Hannah and her twin brother, Ephraim, were the first born of Mary and Gordon. When they were six years old Ephraim died from typhoid fever. When Hannah was sixteen years old the family moved from Jackson Township in Union County, Arkansas to Louisiana. It was there that her parents founded the community of Corinth.

Three years later at age nineteen, Hannah married Andrew G. Tippit. They had two children, William C. “Willie” (1857) and Lanora O. “Nora” (1863). Andrew fought in the Civil War and was killed near Mansfield, Louisiana. After Andrew’s death Hannah married William Thomas Wilson. He was born in Kentucky Oct 1, 1832. W. T. came to Louisiana during the Civil War to fight against slavery. A family story from a Wilson descendant tells that W.T. Wilson had two brothers who fought for the Union, but W.T.’s sympathies lay with the Confederates. So he came south to fight for the Confederates, leaving a wife and two children behind in Missouri. He was captured in New Orleans and later released in North Louisiana where he met and married Hannah. He never returned home to his former wife and children. Between the years 1867 and 1882, Hannah and W.T. had five children: Sarah Elizabeth (1867), Lee Roy (1872), James M. (1875), Queen V. (1878), and Cornelia Frances “Nealie” (1882). In 1901 Hannah died at age 63. William lived another 19 years (Nov 19, 1920). They are buried in Corinth Cemetery. Their lives were blessed with many grandchildren. All the children born to this family lived to adulthood.