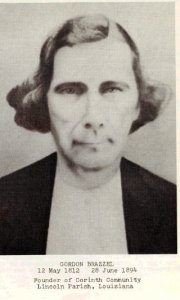 Gordon Brazzel was born in Georgia, a descendant of the Reverend Robert Bracewell of Bracewell, Yorkshire, England, who emigrated to Virginia before 1650 as vicar at St. Luke’s Church.  This information is verified by a Genetic DNA test.  Research is currently being done to document his line from Robert Bracewell. Marguerite Babb Lee provided the information on the ancestry of Gordon Brazzel in her book entitled Tangled Roots of a North Louisiana Branch of the Brazzel Family.  She did not find a paper trail, but concluded from her research the following: Gordon’s parents are Frederick and Mary Brazeal Frederick was born circa 1764 in Virginia.  He had a brother John. Frederick and Mary had four children all born in Georgia. Russell, b. circa 1804, Frederick b. circa 1806, Gordon b. 1812, Hensley b. 1816 Elizabeth b. ? was Frederick’s child by his first wife who died in Georgia

The Life and Times of Gordon Brazzel

Gordon came to North Louisiana in search of a better life.  In 1853 he had a wife and seven children to care for.  He bought 40 acres of land from the U.S. government for $1.25 per acre.  He worked the land and increased his acreage.  Gordon built a two-room schoolhouse for the community.  His children and grandchildren attended this school.  The seats were logs cut in half.  One of the teachers was Mr. Isgett.  When the school closed the students attended Hico School. When his wife Mary died in 1863, one person called his holdings a plantation.    He had amassed a comfortable estate including fifteen slaves and several hundred acres of land.  Here is what he had in 1863 when his wife died and in the midst of the Civil War.

Of course the Civil War did have an effect on his wealth.  It is said he had enough Confederate money to paper his house after the Civil War.  Yet somehow he survived and prospered and continued to live in his home.  The home place was a two story dog trot style house.  There was a hall open all the way through the middle of the house with rooms on each side with tall windows and 12′ ceilings.  The hall was like a tunnel that drew in air and created a breeze.  It made a cool place to sleep in the hot summer months.   The names of two slaves who remained with the family were A. Morris and Kizzie.  A. Morris and Gordon’s son Frederick were friends, and they grew up together.  Fred built a house on his land for A. Morris and each day he would come to Fred’s for meals.  Kizzie was a helper in the house.  She churned the butter and helped Caroline comb her hair. A family burial area is now known as Corinth Cemetery.  A walk through the cemetery will reveal many unmarked infant graves, the names of beloved family members and dear friends engraved on headstones and in one area the unmarked graves of slaves.  Gordon Brazzel and both of his wives can be found in Corinth Cemetery.  However, before his death Gordon gave his children an inheritance of land.  The exact division is not clear.  However, much of this land that has come to be known as the community of Corinth is still in the hands of Brazzel descendants.  It is not a dead community, but one that continues to thrive.   The number of descendants will probably never be accurately counted, but it is safe to say that a characterization of Gordon Brazzel made after his death is true. Gordon Brazzel is a patriarch of quite a sizeable clan who led a life with an influence that went on after his death.

Written by Ann Brazzel
Upon The Occasion of the “Raise the Roof” Brazzel Memorial Reunion
June 20 & 21, 2003
Updated January 2006

Information for this booklet can be found in the book Brazzel-Slayter and Related Families
written by Margie Norman Duke.  The inscription on Caroline’s tombstone
indicates she was born in 1846 and died in 1912. Family stories from the memories of grand
and great grandchildren are included.  Anna Brazzel, wife of Rayburn Brazzel, son of Tom
and Ethel Brazzel, wove the stories and genealogy into this format with assistance from
Carolyn Lewis, daughter of Agnes and Carroll Hunter and Vyonnell Vining, daughter of Jack
and Nancy Brazzel.