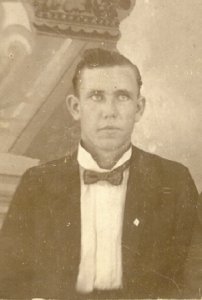 Gordon Brazzel was his father’s 19th child and the second child to bear his father’s name. The first child born to Gordon and Caroline was named Gordon. That child was born May 29, 1865 and died before 1870. So they decide to give this infant son his father and brother’s name.

They had some sad events in their lives beginning with the death of their first son at birth. Lamar was born and died Feb 4, 1904 in Hico, Louisiana and is buried at Corinth Cemetery. Their second child Lillian Elaine Brazzel was born the next December just after Christmas on the 30th. Then at age 16 Lillian Elaine became ill and died July 11, 1921. She too is buried at Corinth Cemetery.

It was their third and last child, Pearl Estell, born December 17, 1907 who lived to adulthood. Pearl married Carmon Edward Williams on Feb. 14, 1932 at age 25. She had three children and later grandchildren. Rayburn Brazzel, grandson of Russ, remembers visits to his uncle’s home. He enjoyed playing in the pastures with Gordon’s grandsons, Dean and Bobby. Gordon had apple and pear trees in the pasture. The boys took delight in robbing the fruit when Gordon was not watching.

Gordon’s wife, Lola Mae, died January 22, 1929. She and Gordon had been married 27 years. She did not live to see her only daughter married or to enjoy grandchildren.

Gordon died after 29 years of marriage. Radell lived to be 83. Both are buried in Corinth Cemetery.