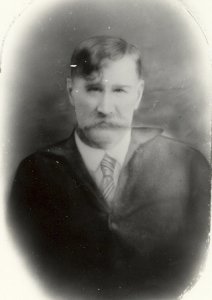 Frederick, the first child of Caroline Brazzel, entered a busy household full of older half siblings. His father, Gordon, had taken a second wife after the death of his wife, Mary. Now at age 55, Gordon had a new son who he named after his own father. Frederick (known as Fred and Fed) took a wife, Carrie Singleton, at age 24. They had one son, Allen Jefferson on December 4, 1891. But Carrie died shortly after the birth of Allen leaving Fred to care for their infant son.

Fred had to farm and leaned on his brother, Russell, and sister-in-law, Lola, to help care for his young son. Fred told granddaughter, Vyonnell Vining, that Carrie was a small woman and never weighed over 90 pounds in her life. After the birth of her son she died of kidney poisoning. She is buried in an unmarked grave in Providence Cemetery.

Five years later he took a second wife, Denoda Patton, who was fifteen years younger than Fred. He was now thirty years old. Over the next ten years, Fred and Denoda had five children. Frederick Lee was born in 1898, Mary Elizabeth in 1901, John Nolan “Jack” in 1903, Minor Eugene “Dunt” in 1905 and Neelie in 1908.

In remarkably good health, Neelie Brazzel Patton enjoys her life and family in Ruston, Louisiana where she has recently celebrated her 95th birthday. When speaking about her father, Neelie recalled how he had a 400-acre farm and knew how to work hard. He had a no nonsense, take care of business temperament and taught his children the value of working. In those days people had to work hard. It was just the way it was. On Sunday they attended Corinth Baptist Church.

Neelie told how her father loved and appreciated his brother, Russell. Once Russ came to Fred and asked to buy 40 acres of his land that was next to his place. Fred said he would give him the 40 acres. He appreciated how Russ had helped him when he needed him and how he had taken care of their mother. So they went to the lawyer and Fred deeded the land over to Russ. Upon hearing this, his wife, Denoda, said that Russ’s daughters, Ella and Jettie should have gotten the 40 acres because they were the ones who took care of Caroline.

Frederick became ill with cancer and died at the age of 80, and Denoda passed away at 84. Both lived long full lives. At the time of Frederick’s death they had been married 55 years. They are buried at Corinth Cemetery.