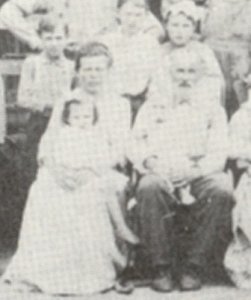 Cornelia was Mary Slayter and Gordon Brazzel’s youngest child. She was eleven years old when Mary died in September 1863. When Gordon remarried in August 1864, his minor children lived in a blended family as he and his new wife, Caroline, began to have children. Cornelia married Frederick Hood (born Sep. 9, 1844 in Alabama) when she was 19 and he was 27. Frederick was the son of Green Hood and Katherine Swint. Cornelia’s sister, Emily, was married to Frederick’s brother, William.

Their first child, William Jefferson, was born in 1872. Mack Wilber was born in 1876, Andrew Jackson in 1878 and Cornelia Ola in 1882. All four children survived to adulthood and together gave their parents 18 grandchildren. Frederick died at age 85 in October 1929. Cornelia survived him by two years and died in October 1931. They had been married for 48 years. Both are buried at Sharon Cemetery.